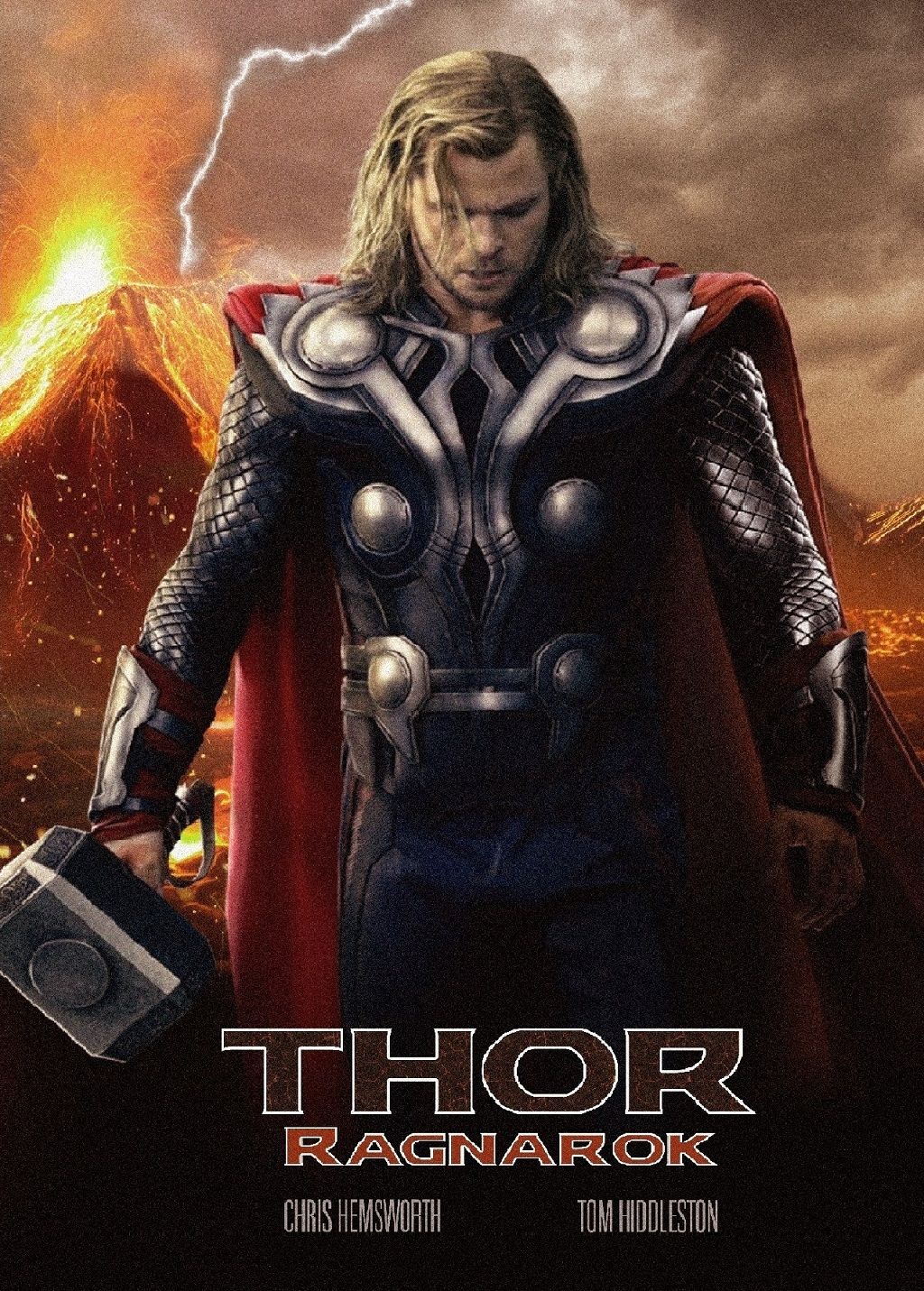 Metacritic Reviews. Photo Gallery. Trailers and Videos. Crazy Credits. Alternate Versions. Rate This. Imprisoned on the planet Sakaar, Thor must race against time to return to Asgard and stop Ragnarök, the destruction of his world, at the hands of the powerful and ruthless villain Hela.

Edit Storyline Imprisoned on the other side of the universe, the mighty Thor Chris Hemsworth finds himself in a deadly gladiatorial contest that pits him against The Incredible Hulk Mark Ruffalo , his former ally and fellow Avenger.

Taglines: No Hammer. No Problem. Edit Did You Know? Trivia On his Instagram and Twitter accounts, Mark Ruffalo referred to his motion-capture suit as his "legendary man-cancelling suit.

What did you think of the movie? Step 2 of 2 How did you buy your ticket? Let's get your review verified. Fandango AMCTheatres.

How did you buy your ticket? View All Videos View All Photos Movie Info. Imprisoned on the other side of the universe, the mighty Thor finds himself in a deadly gladiatorial contest that pits him against the Hulk, his former ally and fellow Avenger.

Thor's quest for survival leads him in a race against time to prevent the all-powerful Hela from destroying his home world and the Asgardian civilization.

Korg had me in stitches. Letitia L Super Reviewer. I've always marveled heh I hate myself at how Marvel Studios has managed to create, maintain and handle their absolutely fucking massive cinematic universe.

And I really do mean massive. You realize how difficult that actually is. To keep all of that lore, all of that mythology, all of those stories and characters in line to where it all makes, at the very least, a little bit of sense?

I've certainly had my issues with Marvel movies in the past and, I'm sure, I'll continue to have them if they do something I don't enjoy. But I have to give respect where it's due and say that Kevin Feige and his team have done a tremendous job at making Marvel Studios the juggernaut that it is today.

The thing is, they knew that building this into a monster would take time. This plan started with Iron Man ten years ago. They didn't rush anything, though they very well could have.

They planted the seeds, slowly, for the eventual joining of the Avengers four years after the original Iron Man came out.

Phase 2 leading to Age of Ultron which, honestly, didn't really blow me away. Phase 2 did have Guardians of the Galaxy and Winter Soldier two of Marvel's best ever films , but every other film wasn't that great.

Phase 3 is still going on as we speak and, really, might be the most commercially successful series of films of all time. And that's just if you include Black Panther and Infinity War, not including films like this one, Homecoming, among others.

There's still three more films from Phase 3 yet to come. After Phase 3, who knows what comes next? Anyway, I suppose that's neither here nor there.

We should probably talk about the Thor franchise, shouldn't we? In my opinion, of all the franchises and I'm not including Avengers , Thor would have to be the worst of them all.

That may be a bit harsh, of course, particularly given how good this movie actually is. I'll summarize my thoughts quickly, I thought the first Thor was kind of trash, possibly the worst film in my opinion in the MCU.

The second movie, while forgettable in the grand scheme of things, proved to be solid popcorn entertainment. They really didn't put their best efforts forward, despite Thor having the best villain of the entire MCU not named Thanos and that is Loki.

Though, to be fair, Loki has "switched" allegiances so many times that it's difficult to call him a full-on villain anymore.

He's definitely an asshole, but he's an asshole that you like. I think Loki's days, unless some major retooling is being done, as a major MCU villain are done and he's now Thor's brother, whom he can never really fully trust.

Anyway, the thing is that Norse mythology is so rich, and I really do fucking mean that look at the recent God of War videogame that, you'd think, they'd make for considerably better and epic movies than we've seen from the Thor franchise so far.

Having said that, this brings us to Ragnarok. The film that RottenTomatoes' consensus stated 'sets a new standard for its franchise I'll accept the former, since the first two Thor movies weren't of the highest of standards to begin with.

But to say that it sets a new standard for the MCU, I find this concept laughable. The reason I say this is, because, quite frankly, this is Thor's take on Guardians of the Galaxy.

It takes place in another planet in, seemingly, another dimension. There's a wide cast of crazy characters, some of whom aren't human.

And they should do something more with them, even if it's something small like a webseries or something. Anyway, I don't compare this to Guardians in a derisive manner.

To be quite honest, I find it refreshing that this movie put fun first and foremost on the agenda. While, obviously, there are better movies in the MCU, this is one of the more consistently fun movies in their entire universe.

Having said that, however, this still fits very neatly within the type of movies that Marvel Studios allows their directors to make.

Visually and tonally speaking, the film is very different from the Thor people know but, really, everything else plays nicely into Marvel Studios' hands.

That's just the way it is. I know that that might sound like I'm "hating" on the movie, but it's not. Not to mention that I hate the term hater, which sort of implies that I can't have a valid opinion on something.

The point is that there's nothing here that deviates from the Marvel formula, a formula they've perfected throughout the years. The problem with this formula, however, is that most movies end up coming across like police procedurals like Law and Order, where it features a different villain each week.

Marvel movies are kind of like that, where a villain is featured in one movie and then they move on to something else. There's obviously more lingering baddies like Thanos which, again, the entirety of the MCU has been building to that showdown.

But, because of that, the villains in the rest of the individual franchises within the MCU end up suffering. And, really, that doesn't really change with this movie.

Hela, Odin's firstborn daughter and right-hand, who was banished when her ambition to take over the world outside of the Nine Realms drove her mad with power.

There's an interesting story to tell there, particularly with how Odin built his empire on killing and destroying other societies. They explore some of that, for sure, but Hela is, really, kept in the backburner.

Hela, essentially, has finally been freed as a result of Odin's death and she wants her rightful place on the throne. Hela grows more powerful the more she's in Asgard.

She destroys Thor's hammer as if it was made of very a small block of ice. There's a few scenes where she's trying to find the key to the Bifrost, which is the sword Heimdall took But, again, she's not as much a focus of the narrative as you would expect given that, well, you know, she's the main villain of the film.

The majority of the film is Thor, Loki, Hulk and Scrapper the woman who brings Thor to the Grandmaster as a bounty, who also happened to be part of one Odin's elite warriors, the Valkyrie, all of whom were slain by Hela trying to find a way to escape Sakaar, a literal garbage planet run by the aforementioned Grandmaster.

The Grandmaster holds these gladiator fights and his champion is Hulk, which is how he meets up with Thor, and, of course, they proceed to have a fight.

One of the things you immediately notice about this film is the amount of humor on display. It's definitely a welcome change and having a director like Taika Waititi helps with that.

While he's not credited as one of the writers in the film, I'm certain he had a lot to contribute in terms of tone, a lot of the jokes and some of the casting decisions.

He also voices Korg. Like I mentioned, the narrative focuses on this motley crew leaving Sakaar, going back to Asgard and put a stop to Hela's reign of terror before she destroys everything Odin worked so hard to build.

This is where one of the movie's biggest 'deviations', if you could call it that, come into play. Essentially, Thor has been having these dreams about Ragnarok and how he's meant to put a stop to them.

Or so he believes. Given that Hela grows stronger the more she's in Asgard, he surmises that, in fact, they weren't meant to stop Ragnarok, they were meant to cause it.

This is, in fact, the only way that they are able to stop Hela as once Surtur is summoned, a demon, he proceeds to destroy all of Asgard and, it's assumed, Hela along with it.

The reason I say it's a deviation is because it's a pretty big change from established Thor lore, at least in the cinematic universe.

This is the home of Thor and his people, whom he and his buddies saved by shoving them into this spaceship. I like this idea, and I doubt they'll actually do anything with it, of Thor and the rest of Asgard's citizens being nomads through space.

And I say I doubt they'll do anything with this since they have set a course for earth. Which, honestly, isn't as exciting as Asgard being a spaceship that travels through the cosmos.

This is the most exciting change an MCU flick has had in a while. Because, really, everything almost always is resolved by the end of the movie with a neat little bow.

In this case, though, it's not and Thor's journey with the rest of his people is just getting started. But still, I like that change and, again, I just hope they do more with it than just having Asgard already established at the start of the next Thor movie.

The casting, really, is tremendous. I think the movie being considerably lighter in tone than even, really, most of the rest of the MCU rubbed off on a lot of the cast.

Cause, really, Chris Hemsworth who's really talented just excels at the comedic side of Thor's character. Thor, as a character, hasn't always been the most interesting.

By that I mean that he's just a God, who deals with his trickster brother and saves the world from destruction.

I felt that his personality, in the first film which, as I mentioned, I didn't like was the best representation.

He's just an arrogant God, who feels like his status as such should give him the authority to do what he wants.

Other than that, there hasn't been much to the character in terms of growth. That is, at least, until this movie.